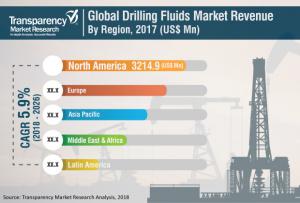 ALBANY, NY, USA, September 24, 2020 /EINPresswire.com/ — The drilling fluids market is expected to witness an innovative time period ahead. Drilling fluids are largely dependent on the Oil & Gas industry for growth. The growing demand for oil in Asia Pacific and recent disturbances in the Middle East, and rising Plugging and Abandonment (P &A) costs are expected to drive significant opportunities for innovation in the near future.

According to a 2018 report by Oil & Gas Authority in UK, well abandonment activity has increased four-fold since 2016. This has resulted in massive P &A costs to the industry. In 2016, nearly 402 million pounds were spent on the abandonment of 76 wells. Moreover, 33 million barrels a day more can help the UK meet its energy needs which is not being fulfilled. This is a tremendous opportunity on the horizon for players in the drilling fluids market.

Rising oil prices, and constant drive to reduce reliance on oil imports are expected to drive growth of the drilling fluids market. Many emerging countries like India are undertaking increased oil and gas exploration activity to meet demand. India, the third largest importer of oil has announced a decision to undertake exploration of 200,000 sq.km. Earlier, the area was set to 700,000 sq.km. However, declining oil output in the country and projected demand for oil which is expected to triple by 2035 is expected to drive considerable oil and gas exploration activity. Moreover, the country has taken several key initiatives like opening up of 100% FDI in oil exploration activity. The growing demand for oil in major economies like the US, China, and India are expected to drive significant growth for the drilling fluids market in the near future.

Drilling fluids also known as mud can be toxic in varying degrees. It can also be difficult to dispose of in sustainable manner. Moreover, in emerging countries, wells are often unregulated which limits experimentation and innovation conversely. Additionally, water based drilling fluids have already proven effective in replacing the toxicity of conventional chemicals. Even toxic-based water chemicals like hydrochloric acid can be become more soluble when mixed with other water based drilling fluids. Additionally, fluids like bentonite and barite have been used in the mining industry effectively earlier. There are many other water-based fluids like soda ash, anhydrous lime, and caustic which have quickly gained popularity in end-applications. The growing regulations in emerging nations, and growing demand for water-based fluids are expected to drive growth of the drilling fluids market in the near future.