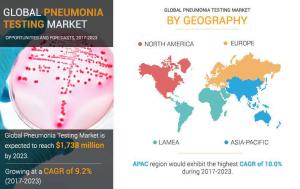 Increase in mortality rate of pneumonia among children has made way to rise in the requirement of technologies that could be used for early pneumonia diagnosis.

PORTLAND, OR, UNITED STATES, October 22, 2020 /EINPresswire.com/ — According to a new report published by Allied Market Research, titled, Pneumonia Testing Market by Method, Technology, Type, End User, and Geography: Global Opportunity Analysis and Industry Forecast, 2017-2023, the pneumonia testing market accounted for $932 million in 2016, and is estimated to reach $1,738 million by 2023, registering a CAGR of 9.2% from 2017 to 2023.. North America is the highest contributor in the pneumonia testing market in 2016; however, Asia-Pacific is expected to witness the highest growth rate during the forecast period.

Pneumonia is a type of lung infection caused by bacteria, such as Streptococcus pneumonia, virus, fungi, and parasites. In pneumonia, the air sacs of lungs called as alveoli are filled with fluid or pus that causes inflammation. The symptoms of pneumonia include short breathing, fever, chest pain, nausea, and vomiting; however, these clinical symptoms overlap with many other diseases such as asthma, bronchitis, and common cold, making it difficult to diagnose pneumonia. Physicians recommend tests such as blood tests, sputum test, pleural fluid culture, and pulse oximetry test to confirm the onset of pneumonia. As per the data by WHO, pneumonia is one of the major factors causing death in children, accounting for almost 1.2 million children under the age of five die annually. This disease is most prevalent in South Asia and African countries.

Recent advancement in pneumonia testing systems such as the development of enhanced nucleic acid detection tests and advancement in POC tests is the major factor that contributes toward the growth of the pneumonia testing market. Moreover, increase in awareness toward early diagnosis and rise in government expenditures on healthcare fuel the market growth. However, limited detection capability & accuracy of some of the pneumonia testing products and regulatory & economic hurdles hamper the market growth. Conversely, surge in adoption of molecular diagnostic testing and high untapped market potential in the developing economies are anticipated to provide lucrative opportunities for the market.

The global pneumonia testing market is segmented on the basis of market, by method, type, technology, end user, and region. In terms of method, the market is classified into immunodiagnostics, molecular diagnostics, and point-of-care (POC) testing. By type, it is bifurcated into analyzers and consumables. Based on technology, it is categorized into enzyme linked immunosorbent assay (ELISA), immunofluorescence, western blot, polymerase chain reaction (PCR), immunohistochemistry (IHC), and others. Depending on end user, it is divided into hospitals, diagnostic laboratories, homecare, and others. Based on region, the market is analyzed across North America, Europe, Asia-Pacific, and LAMEA.

The POC testing segment was the major contributor to the market in 2016, due to multiple benefits offered by this technique such as technological advancements, ease of use, and rapid results. The consumables segment is estimated to register the highest growth rate during the forecast period, owing to the smaller shelf-life of consumables and their frequent usage for pneumonia tests 2017-2023.

Among the end users, diagnostic laboratories occupied the major share of the pneumonia testing market in 2016, due to large number of tests performed for diagnosis of pneumonia.

In 2016, North America accounted for maximum contribution to the total revenue generated, owing to rise in prevalence of pneumonia and technological advancements in various pneumonia testing products. However, Asia is projected to grow at the highest CAGR during the forecast period, owing to increase in investments by major companies in R&D activities.

For Purchase Enquiry at: https://www.alliedmarketresearch.com/purchase-enquiry/3776

Key Findings of the Pneumonia Testing Market:
• POC testing is projected to grow at the highest rate during the analysis period.
• Diagnostic laboratories segment generated the highest revenue, and is expected to continue its dominance in future.
• North America dominated global pneumonia testing market in 2016, and is projected to continue its dominance in future.
• China is expected to grow highest in the Asia-Pacific region during the forecast period.
• ELISA was the largest contributor among the technologies segments.