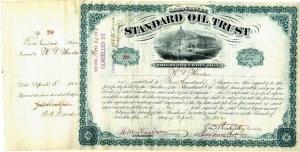 Standard Oil Trust was forced to dissolve due to violations of the Sherman Antitrust Act due to being accused of being an illegal monopoly.

The Standard Oil Trust stock certificates were issued in 1882 and were printed by the Franklin Bank Note Company. The certificate was hand signed by John. D. Rockefeller, Henry Flagler and Jabez Abel Bostwick and is over 139 years old.

"The Standard Oil Trust began in 1882 by merging all of John. D. Rockefeller's oil properties and had an initial capital of $70 million. There were originally forty-two certificate holders, or owners, in the trust. After ten years the trust was dissolved by a court decision in Ohio due to violation of the Sherman Antitrust Act which was an attempt to restrain the power of trusts with respect to restraint of trade or commerce." according to Bob Kerstein, CEO Scripophily.com.

Standard Oil Trust lost a Sherman-related lawsuit in Ohio in 1892, but it was later able to incorporate in New Jersey as a holding company when New Jersey had adopted a law that permitted a parent company to own the stock of other companies. It is estimated that Standard Oil owned three-fourths of the petroleum business in the U.S. in the 1890s.

Rockefeller held the title of president of Standard Oil until 1911, but he retired from active leadership of the company in 1896. In 1911 the U.S. Supreme Court found the Standard Oil trust to be in violation of the anti-trust laws and ordered the dissolution of the parent New Jersey corporation. The thirty-eight companies which it then controlled were separated into individual firms.

Some of these spin off companies included:

Stock certificates are collected and given as gifts because of their historical significance, beauty and artwork, autographs, notoriety, as well as many other factors. The supply of new certificates reaching the collector market has been substantially reduced due to changes in state laws and stock exchanges rules. Many companies are no longer required to issue physical stock and bond certificates, a process called “dematerialization.”

Scripophily (scrip-ah-fil-ly) is the name of the hobby of collecting old stock and bond certificates. Certificate values range from a few dollars to more than $500,000 for the most unique and rare items. Tens of thousands of Scripophily buyers worldwide include casual collectors, corporate archives, business executives, museums and serious collectors. Due to the computer age, more and more stock and bonds are issued electronically which means fewer paper certificates are being issued. As a result, demand for paper certificates is increasing while supply is decreasing.

Scripophily.com and Old Company Research Services was founded by Bob Kerstein (Bob.us). Bob is a CPA and CGMA, and has more than 44 years of senior management experience in the Cellular, Cable TV, Satellite, Internet, Professional Sports and Entertainment Industries. Bob is also the President of the Professional Scripophily Traders Association (PSTA) and co founder of the American Stock and Bond Collectors Association.