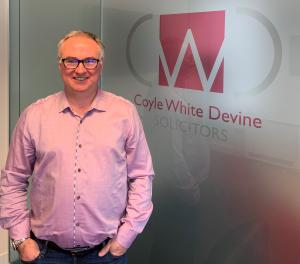 Working with Firexo has been one of my recent working highlights… a business that is focussed on disrupting an industry
for all the right reasons, fundamentally with the aim of saving lives !”
— Peter Coyle

AMERSHAM, UNITED KINGDOM, April 22, 2021 /EINPresswire.com/ — All at Firexo were delighted to witness the news of Peter Coyle's accreditation as 'Times Lawyer of the Week' "Peter is a man of tenacity and determination, he sets out to achieve plausible goals with a concise measured approach; Peter is a highly valued support to Firexo and a significant member of our team."
Dave Breith CEO

The Times interviewed Peter Coyle, founding partner at Coyle White Devine in Amersham, Buckinghamshire, who acted for Andrew Green, who won £1.7 million on an online Betfred blackjack game in 2018. The High Court ruled that the bookmaker must pay him the jackpot plus interest, having refused to pay out based on an alleged software glitch.

What were the biggest hurdles you had to overcome in this case?

"Managing the expectations of an angry but financially vulnerable client at the same time as managing claims in letters by Betfred’s lawyers that I had defamed their client by commenting on Twitter and being threatened with defamation proceedings against me."

What is the best decision you have taken as a lawyer?

"To move out of corporate law in the City to help the more needy out in the provinces."

Who do you most admire in the law?

"My first boss at Wilde Sapte, Malcolm Glover, who went on to be the legal adviser to the governor of the Bank of England. Mr Glover was terrifying and brilliant in equal measure."

What is the best advice you have received?

What is the funniest thing that has happened in your job?

"I was once paid with a tray of eggs. My client — a wonderful human being, who we prevented from being evicted from his farm at the age of 86 — was much better at bartering than me."

What are the best and worst elements of being a lawyer?

"Best: very occasionally we change lives for the better. Worst: waking up in the middle of the night when you have tried to reduce a client’s stress by taking it on as your own."

What law would you enact?

"Sad to say, after nearly 30 years of litigation practice, but we are still in a position where the most in need of access to justice are the least able to afford it. We need effective legislation that brings justice to the masses, not just the rich."

What has kept you going through lockdown?

"West Ham United’s quite miraculous upturn in form and pursuit of the European dream; I so hope we can travel again next season."

"Working with Firexo has been one of my recent working highlights, to be involved with a business that is focussed on disrupting an industry for all the right reasons, fundamentally with the aim of saving lives , gives a real sense of purpose with a viably positive objective !"